A unique kind of Art workshop, located on Dominican Republic, composed of longtime and experienced wood craftsmen lead by the artist Georges Thevenet. Georges, a Franco-Dominican artist trained as an architect in France is driven by the preservation and revaluation of a usually ignored and depreciated local cultural heritage (but still very present visually as well as in the culture of the island). 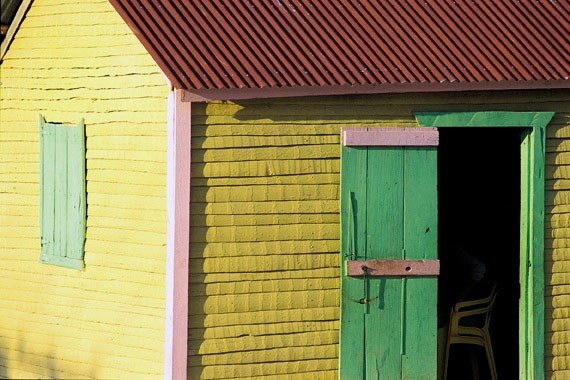 Recycled wood formerly used for a long time to make shelters and homes, keeping as far as possible the wear and tear marks and forms reminding of this primary function, as well as its patina and colors of yesterday while following the 3R- Elementos logic (Reduce-Reuse-Recycle) as described in the United Nations Centre for Regional Development (UNCRD) seminars

The basic wooden material being used in the rural and coastal traditional housing of the Dominicans from the last century, painted many times creates an intrinsic value much higher than new wood’s that has no memory and no past. Based on this postulate, recycle this deeply humanized wood, expressing in its wear and tear marks caused by the Humans, the sun and the salty sea’s breeze, a considerable part of the Island’s History and Roots.

Given a new form, this material is allowed to come back to life and embellish the home of the Dominicans thanks to an artistic expression associated to a daily use, designed for anyone sensitive to Caribbean shores’ tonalities and nostalgic of the Tropical lifestyle. 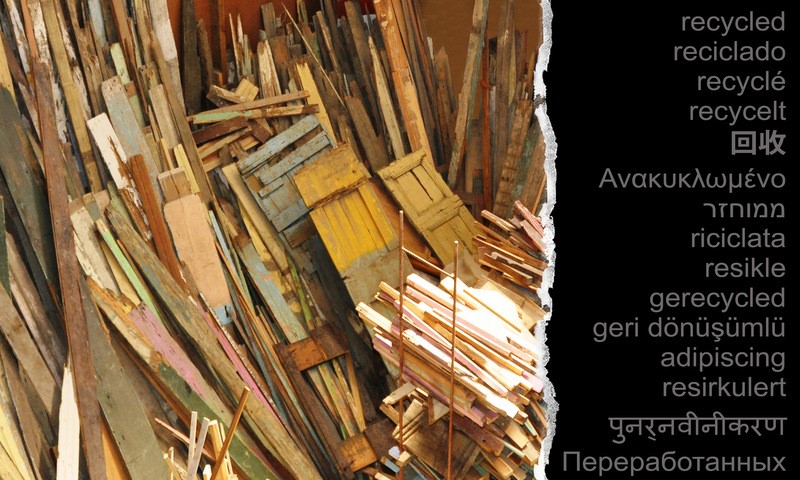 Certificate of Authenticity: It formalizes the implied contract between 3R-Elementos’Art workshop and the Client, stating the title of the purchased piece of furniture, its precise colors and dimensions, date of manufacture and assembly technique, personal code, and signed by its Artist Georges Thevenet.

A singular marquetry inspired by the 15th Century European cabinetmakers, a combination of many small mixed woods pieces, to create extraordinary furniture made of unique pieces, all of them signed and provided with their Certificate of Authenticity, useful and artistic at the same time, as a particular testimony of the History of Santo Domingo…

Warranty of Origin: It verifies that the piece was created with the distressed woods of Authentic Dominican Republic old houses and recycled materials using the technics described above. It confirms that the art furniture unit is unique, numbered and custom made and states its distinctive colors and dimensions.

Georges Thevenet, originally from France, studied architecture at the University of Lyon. This artist comes of a family of woodcraftsmen and started making small pieces when he was a young kid. At the age of 26 years, as the intrepid young often do, he left his native country to explore the world, seeking adventures and new cultural experiences.

Until 2006, he worked mainly in the photography industry. Santo Domingo in the Dominican Republic being his base, he explored the Caribbean region and Latin America, and was fascinated by the cultural diversity of the people inhabiting the cities, small towns and villages, and especially by the spectacular landscapes composed of exciting coasts, fertile plains, endless mountains and lush tropical forests.

Interested in the history of his new homeland and while seeking to understand its roots, in 2008 Georges met in the small eastern town of La Romana, Dominican Republic, a well-known artist painter who collected distressed wood to incorporate them into his paintings.

The idea of creating art furniture with reclaimed wood occurred when Georges heard about an old house being demolished in La Romana. These houses are very typical of the Dominican Republic. It is common to see an elderly gentleman relaxing in his rocking chair on the porch, backed by the faded turquoise walls of the house, worn by years of sun and sea breezes, nostalgia and images of a bygone era were evoked. To George’s creative eye, the exhibition of the well preserved Victorian details from the first half of the last century stirred tremendously his artistic imagination.

However, looking beyond its plastic dimension, Georges understood that there was more to it than that. The wooden elements of these antique houses, even the modest ones, with its tones of the past and its weathered textures, had an important historical and cultural value, representing a unique heritage. Motivated by the cultural, artistic and business opportunities, he decided to work in association with Jean-Pierre to preserve and reuse this wood, artistically combining its singularities with modern furniture designs. The result is a unique collection of Art Furniture, each piece honoring in its own distinctive way its Caribbean origin. 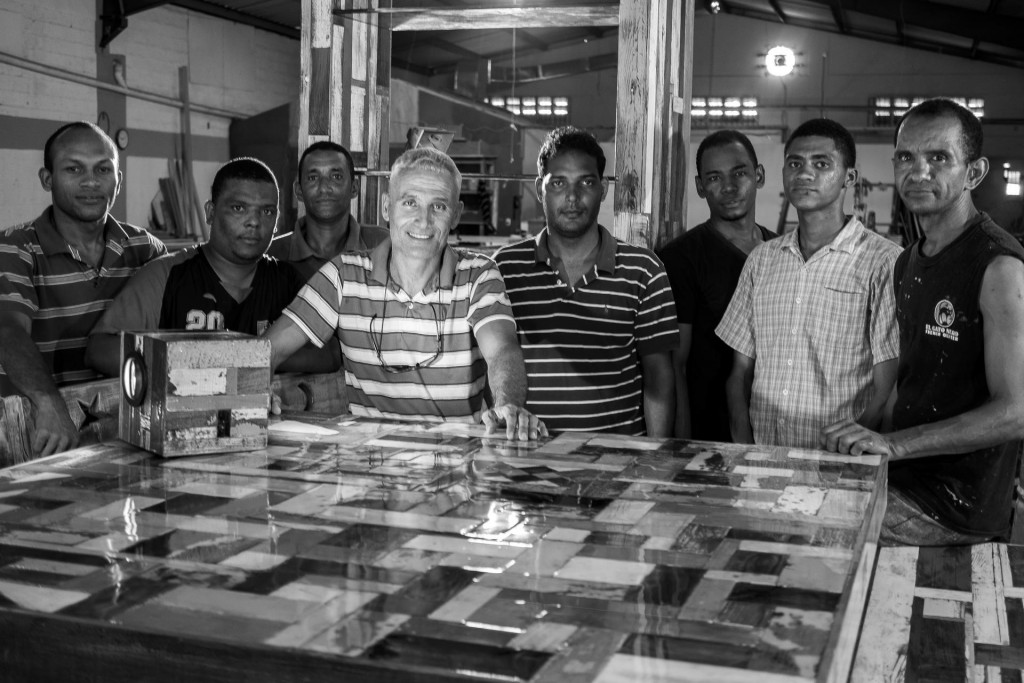 The original Art furniture collections were first exhibited in La Marina of Casa de Campo, where they were warmly critiqued. In 2012, Georges opened a new showroom close to the prestigious and exclusive Casa de Campo resort in La Romana, where many of his clients own luxury villas and mansions. In his new workshop with his team of experienced wood furniture craftsmen, he began favoring custom-made work, more oriented towards decorators and interior designers. He added to the name «ELEMENTOS», the prefix «3R», to convey the company’s logic based on the reuse of wood formerly used to build houses and to reemphasize its historical value.

After 2012, several distributers & representatives opened nationwide, in “Distrito” and “Acropolis Mall” in downtown Santo Domingo, the capital city of the Dominican Republic, “Art Gallery & Restaurant” on the east coast (Bávaro and Punta Cana), in the renowned art foundation of the Dominican Republic “Centro Leon” located in Santiago (the 2nd largest city of the island), and in the northeastern region of Samaná, in Puerto Bahia.

Temporary expositions have also been organized nationwide: in the French Consulate, in the prestigious Alto De Chavón Art Village in Casa de Campo, high end Blue Mall in Santo Domingo and other exclusive commercial centers and locations whenever and wherever special events are organized.

Only making exclusive pieces of furniture, the workshop includes a photography studio to record graphically the specific end products, the handmade technique employed and the delicate artisan procedures involved to create and insure the high quality furniture that potential customers expect. 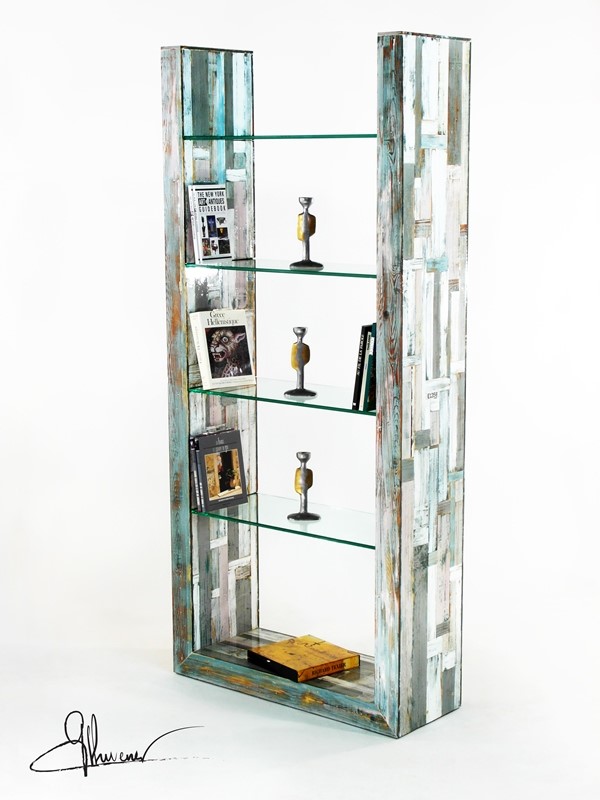 By renewing regularly its collections, Georges pays close attention to the new decorative trends, extending his Art furniture to contribute to all domestic space areas such as the bedroom (beds and bedside tables), the kitchen (central islands and work surfaces) and the doors (main entrance and interior doors) as well as for the professional spaces with conference tables and desks.

Among the most memorable innovations of the 2014 collection, are:

The 2014 collection is dominated by the white and pearl tones, with strong contrasts, cold with the petroleum blue and hot with the Syrah tones, and with a greater presence of asymmetrical alternate textures applied to the furniture.

The signed «3R-ELEMENTOS collection is », features the classics from the previous seasons drawn for wide spaces, with a linear texture and a longitudinal marquetry.

For the of summer of 2013, some very beautiful wrought iron bases, made by the famous artist blacksmith José Ignacio Morales enhanced the range, which were finished with marquetry and matched with perfection to create a new spectacular units, strongly rooted in the Dominican idiosyncrasy, providing a spectacular result from an aesthetic point of view. 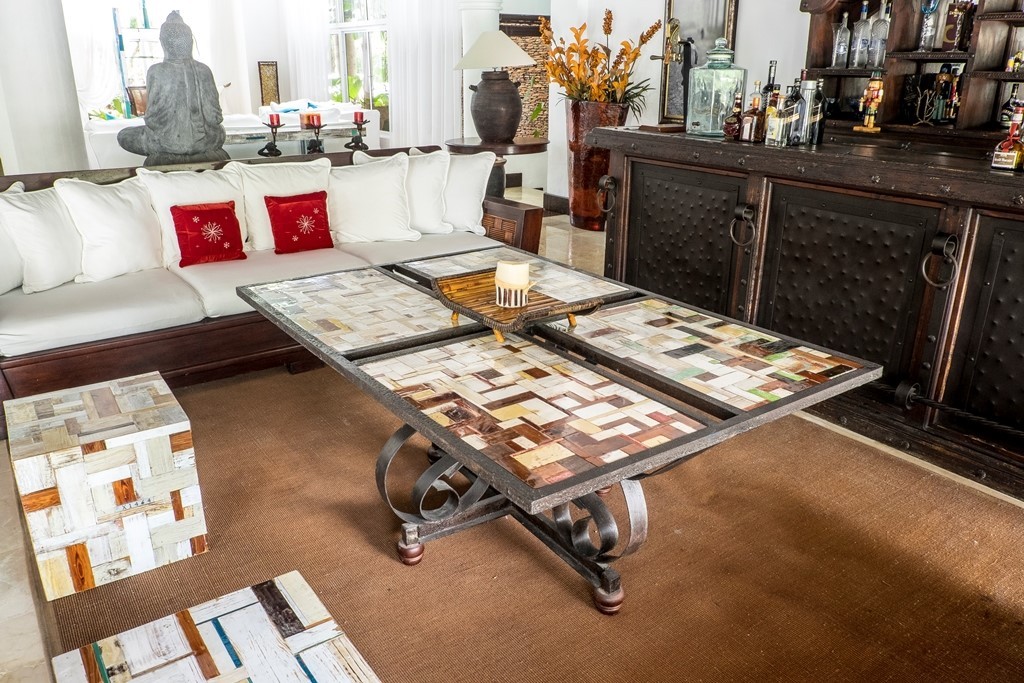 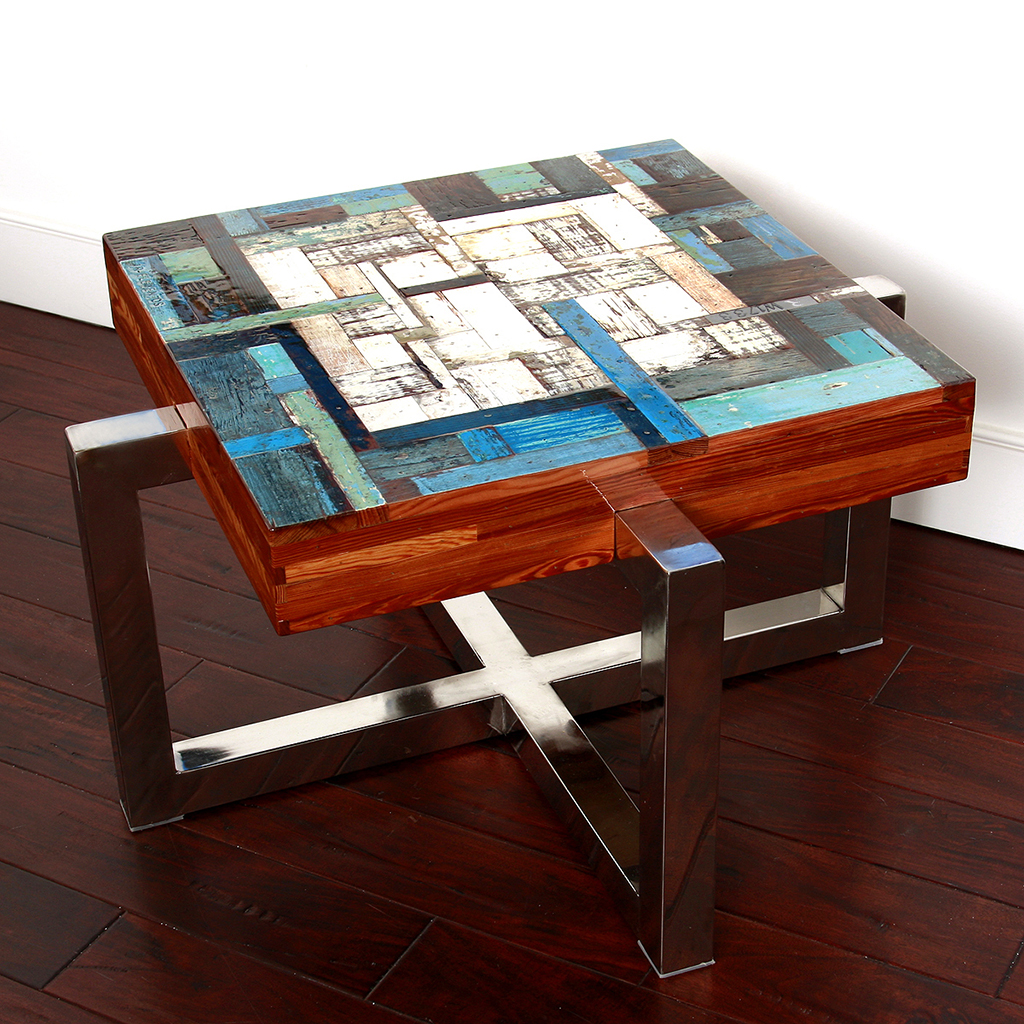